Global Ethnographic’s (GE) Editorial Board members talk about their individual visions for the site. Our editorial board members are all professional anthropologists working in a variety of different fields and regions.

“Global Ethnographic is a journal that we hope will reach a broad audience working in a variety of locations, and on a number different topics. The journal is applied in its focus and we hope that submissions can translate anthropological themes, both theoretical and methodological, to issues that have global relevance. In order to respond to such issues, authors who chose to publish in this journal may draw from a number of sub-disciplines within Anthropology. For example, medical anthropologists may wish to draw our attention to the way in which biomedical technologies are bringing about changes to society and individuals within it. Development perspectives may bring us an analysis of intra-cultural tensions or harmony within modern nation states. The journal would also like to showcase ethnographic examinations of different and varied groups (and their inter-relationships), from minority and Indigenous groups through to governments and powerful corporations. What can we learn from anthropological perspectives, how do they frame issues and responses to complex problems? In what ways can Anthropology engage with the global? As a medical anthropologist, one of my interests is in how issues around culture and society intermesh to create us as human subjects. A variety of experiences become to be defined as medical problems within various societies, such as alcoholism, and suicide. However the ways in which these states come to be known and experienced as disordered is wrapped up in a number of processes related to institutional and government processes. Specific cultural and social norms exist around various disordered states and these help to define and support informal systems of control. However, with the increasing medicalisation and bureaucratic control of medical understanding and response systems, informal system of control have little place in the constitution of human subjects. In what ways do humans work within these systems to bring meaning to their experiences, which are defined as disordered? How do they use cultural and social norms to support relationships with families, communities and others in similar states.”

“Global Ethnographic, in its interest in reaching out to a public that wants to engage with anthropology, is really offering a wonderful and necessary new resource. I’ve been locked up in various academic ‘ivory towers’ in various parts of the world as a student and then lecturer for over 3 decades now, and ever since I first decided to ‘be an anthropologist’, I’ve felt that the most gratification I’d get from the job would be knowing that people who don’t necessarily pursue academic careers but work in the public sector in a range of disciplines and practices would learn to deeply appreciate the diversity of human experience through their studies. This appreciation could then be applied effectively in the larger public sector, in political spheres, in medical professions, in social services. The reason I’m so excited to be involved in OICD and its online magazine, Global Ethnographic, is that it allows for quality descriptive and analytical ethnographic work to be read and enjoyed to all who would wish to access it, with merely a press of an button to the URL link. Public knowledge, publically shared, globally effective, open to critical and supportive opinion – what more could one wish for!?”

“When Global Ethnographic was conceived in 1999 there were few sources of “popular anthropology” writing either online or off. While today, professional and student/graduate anthropologists are more active in attempting to popularize anthropological perspectives, the discipline is still nowhere near, say, psychology or geography in terms of public appeal. Unlike hardcopy magazines such as Psychology Today or National Geographic, anthropology still lacks a popular interface with the general public. And this at a time when the world needs the perspectives that anthropology brings to the local contexts of our social lives more than ever. GE seeks to fulfill the original vision of an online popular hub of readable ethnographic articles attracting established anthropologists, students and the general public. Today, more than ever, we are seeing the degree to which the vision needs to be made real; not only to satisfy established and emerging fans of the anthropological perspective, but to disseminate the very perspectives the world now needs to begin to solve its many interconnected problems. We hope that this site will demonstrate one way in which anthropological research and theory, ideas and action, can act as tools for us all. We hope that in the process, the site demonstrates the inherent value of all anthropological work—its ability to vastly enhance the lenses through which people understand and interpret the world around them.”

Grace GONZALEZ is Assistant Professor (Kōshi) at the College of Foreign Studies, Kansai Gaidai University (Japan). She holds Ph.D. in International Political Economy from the University of Tsukuba (Japan). Grace specializes in contemporary issues of urban political economy, particularly those reconfiguring the form and function of cities in the context of the knowledge/cultural economy. As a trained interdisciplinary scientist, Grace orientates her research and teaching methods towards inter, trans, and post-disciplinary approaches in the social sciences. Her research, in particular, has largely borrowed from ethnographic and phenomenological methods in terms of data collection and interpretation. Grace’s current research focuses on policy trends of event-led regeneration, urban branding and entrepreneurialism in London, Tokyo, and Seoul. Her most recent publications include “From London 2012 to Tokyo 2020: Urban Spectacle, Nation Branding, and Socio-Spatial Targeting in the Olympic City” (in London 2012 and the Post-Olympics City: A Hollow Legacy? Palgrave Macmillan, 2017) and “Asian and Global? Japan and Tokyo’s Cultural Branding Beyond the 2020 Olympic and Paralympic Games” (in Asian Cultural Flows: Creative Industries, Policies, and Media Consumers. Springer, 2018).

None of GE’s great content or innovative platform features would be possible without its committed staff.

Dr Tiffany Cone is an Assistant Professor of Anthropology at the Asian University for Women in Chittagong, Bangladesh. Dr. Cone’s primary research interests lie in the field of psychological anthropology and include cross cultural conceptions of the self, practices of self-cultivation and meaning-making, processes of rupture and healing and Buddhist, Daoist and Sufi philosophy and practice. Her most recent publication is Cultivating Charismatic Power: Islamic Leadership Practice in China, published by Palgrave MacMillan. The book explores self-cultivation practices amongst a Sufi community in China. She has also produced a number of educational and observational documentary films in China, South Asia and the Pacific. The most recent of these was a film titled Soul Singer which explored the relationship between music and spirituality amongst the Baul community in the South Asian context of Bangladesh. She is currently working on a long term research project exploring knowledge diasporas and migration within Higher Education in Asia, considering identity formation, belonging and imaginings of the future.

Teodora brings insightful anthropological perspectives and professional editorial skills to Global Ethnographic. She holds a PhD in Anthropology from Binghamton University, State University of New York (USA) and an Indigenous Peoples’ Rights certificate granted by the Human Rights Education Associates (HREA) and the Human Rights Centre of the United Nations-mandated University for Peace in Costa Rica. Teodora focuses on projects at the intersection of anthropology, advocacy journalism, storytelling, and civic engagement; areas of specialization include social justice, human rights, environment, and traditional knowledge (with an emphasis on indigenous issues worldwide).

Teodora has extensive editing experience for academic presses and online media. She is Copyeditor for the “Fourth World Journal” published by the Center for World Indigenous Studies (CWIS), and Senior Editor for “The Global Women’s Narratives Project” (focused on themes of war and peace, religion, global health, gendered violence, identity), a program of the UNESCO Chair on Global Humanities and Ethics at the University of Southern California and the Oxford Consortium for Human Rights.

Teodora contributed as Assistant Editor for the “IK: Other Ways of Knowing” journal on indigenous knowledge from a global perspective published by the Pennsylvania State University. She was also Editorial Assistant for the Routledge quarterly academic journal “Identities: Global Studies in Culture and Power”. Teodora is a translator (from Spanish into English) for “Global Voices”, a citizen media website comprising global news and stories, and to the “Rising Voices” initiative of the “Global Voices” aiming to bring civic voices from marginalized and indigenous communities to the global conversation. Teodora is a qualitative researcher with international research experience in Central America (Guatemala, Costa Rica and Panama), South America (Peru), Asia (Sri Lanka, Nepal) and Europe (Romania). She currently lives in Philadelphia, USA.

Dr Faye Miller has been a member of the editorial and web development team for Global Ethnographic and OICD projects since 2013, collaborating in both support and coordinator roles. Faye works between Australia and the USA as a researcher in information science studying how people interact with and experience many different forms of information and knowledge in physical and digital spaces. The goal of her research is to use qualitative approaches such as ethnography and grounded theory to gain a better understanding and increased empathy for various human experiences associated with interacting with information for positive growth and development. This can allow people to design more effective human-centered environments, such as in education, health, communications, and other areas of life. Faye is also Lecturer in Information and Knowledge Management and Convenor for Professional Practice and Research Projects in the Master of Information Studies (Online) course, University of Canberra, Australia. Faye holds a PhD in information ecology (QUT), a Masters degree in information and knowledge management and a Bachelor degree in history, psychology and literature (including media/film studies and screenwriting). She is also an experienced vocalist/guitarist and enjoys performing live and being creative with words, music and film. 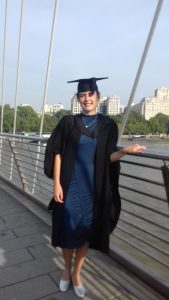 Lily Fox is a graduate of Anthropology from University College London, and is now beginning her Master’s at Helsinki University. She has been working on social media for GE since 2018, and enjoys reading innovative ethnographic research from across the globe. Her interests in anthropology and work centre on refugees, migration, solidarity movements and public art. Between living in different countries across Europe for work and studies, she loves spending time in rural Wales where she grew up.